AppleInsider is supported by its audience and may earn commission as an Amazon Associate and affiliate partner on qualifying purchases. These affiliate partnerships do not influence our editorial content.

Playdate is a new gaming console from the beloved Mac development studio Panic. It’s small, has a metal crank, and is unlike any console we’ve played to date — and we love it.

Panic announced the Playdate back in 2019 with a planned market debut of 2020. Those plans got derailed when Covid sent the world into lockdown.

A new launch date was set for 2021, though that was scuttled after a critical battery issue surfaced. Now, Panic appears to have production flowing and bugs ironed out.

Who created the Playdate

Historically, Panic has been a software development company, creating Mac-specific software since 1999. You may have heard of their development-focused apps such as Coda, Transmit, Prompt, or Nova.

It’s slowly branched out from its core competency to game publishing. Panic helped bring outstanding titles Untitled Goose Game and Firewatch to market. Now its focus is turning to its inaugural hardware product, developed in conjunction with Teenage engineering. 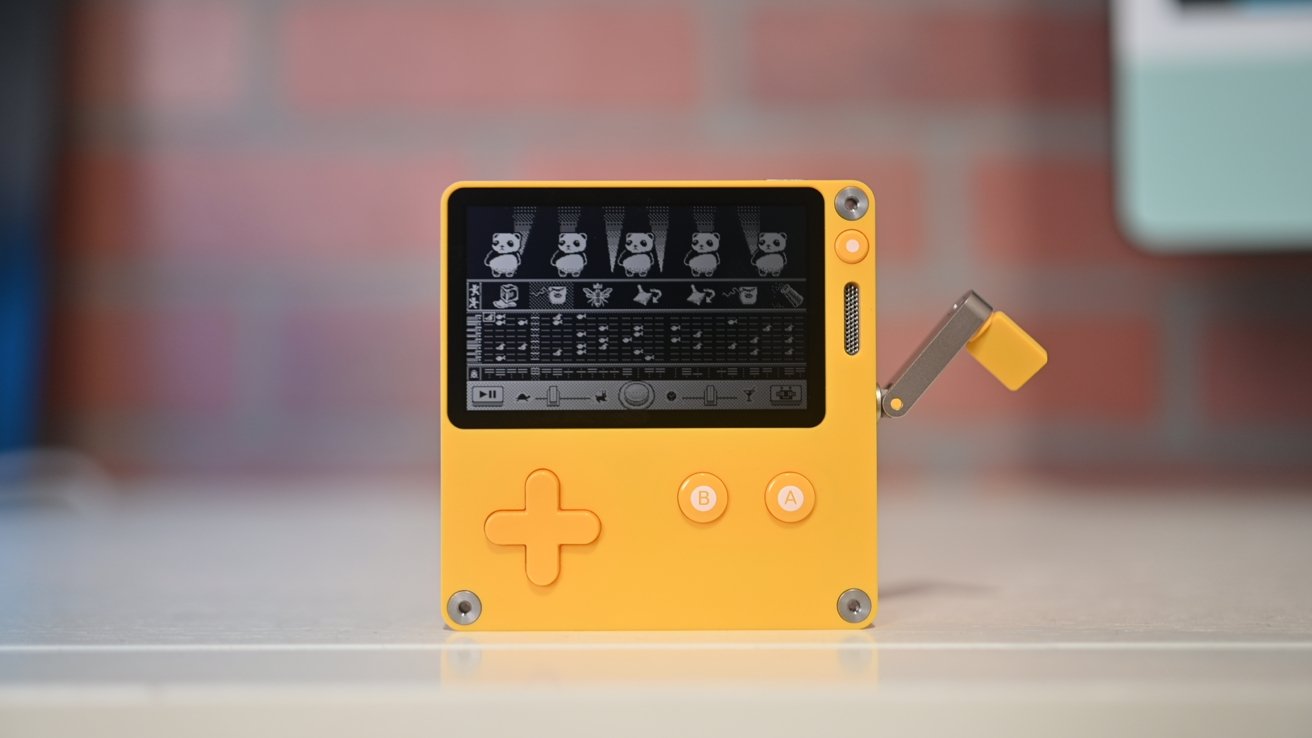 Hardware is an entirely different beast than software. Panic had a rough road ahead not even including the challenges COVID induced.

After playing with the Playdate for the past few weeks, we’re convinced they managed to pull it off with great success.

The diminutive Playdate fits neatly in the palm of your hand. It measures 76mm by 74mm by 9mm, which is small enough to fit in your pocket. 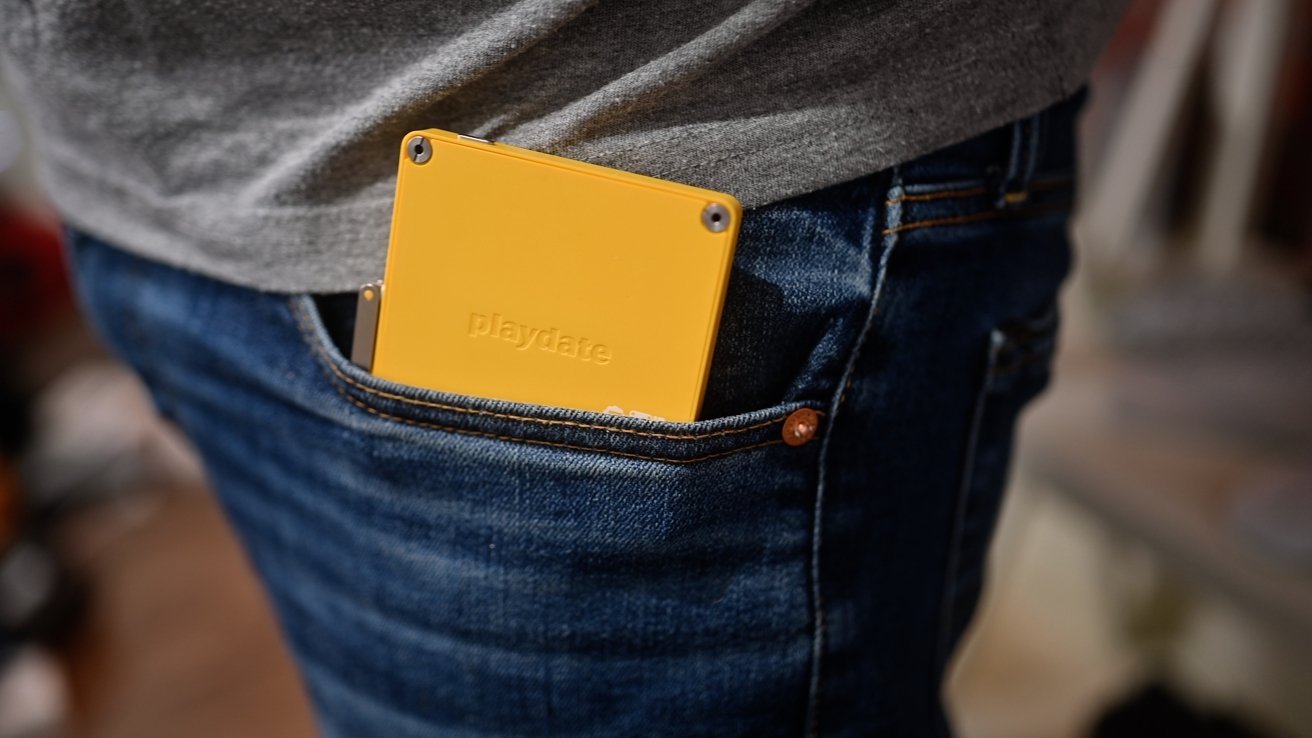 Playdate fits in your pocket

It’s got a 400 by 240 1-bit display, a front-facing mono speaker, headphone jack, and support for inline mics on your headphones. Internally it has 4GB of flash storage, a three-axis gyroscope, 802.11n Wi-Fi support, and Panic says Bluetooth support will be arriving soon. 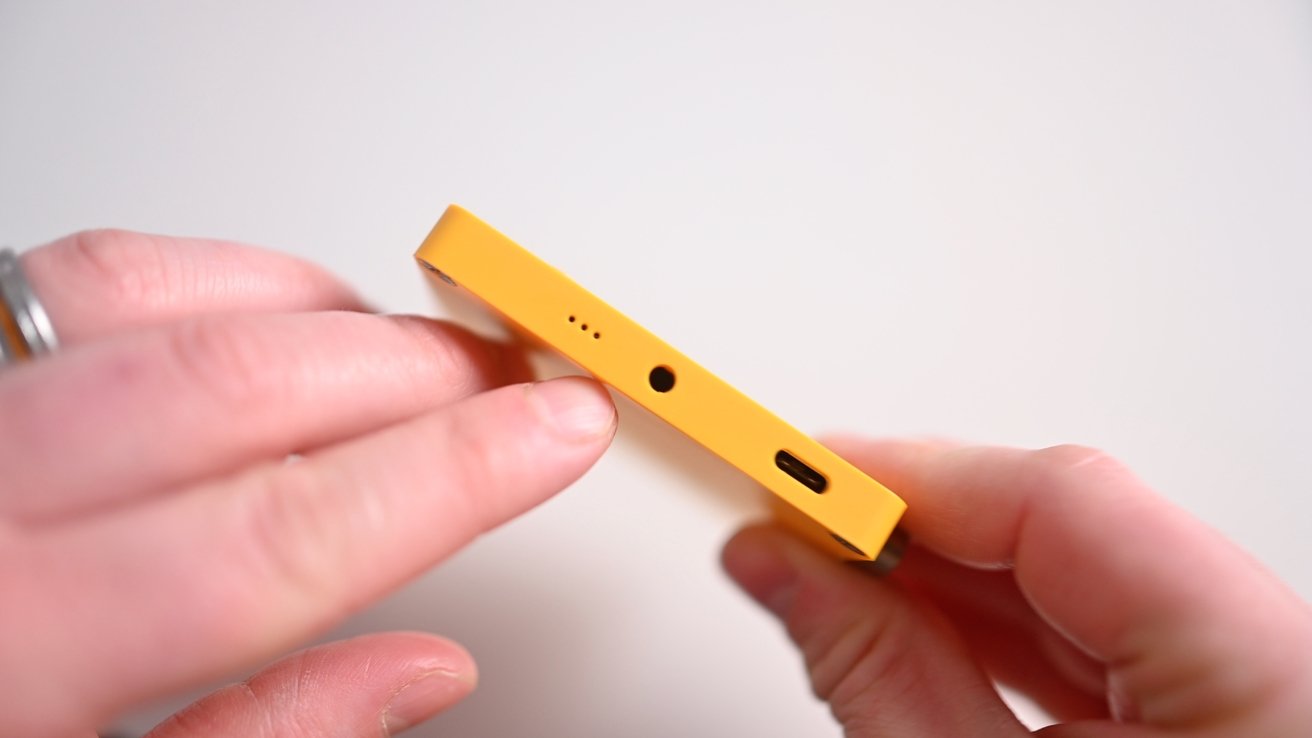 You use a USB-C cable to power up the internal battery which offers an impressive eight hours of playtime on a single charge. While in standby mode, an analog clock fills the screen. On standby, the battery will last up to two weeks. 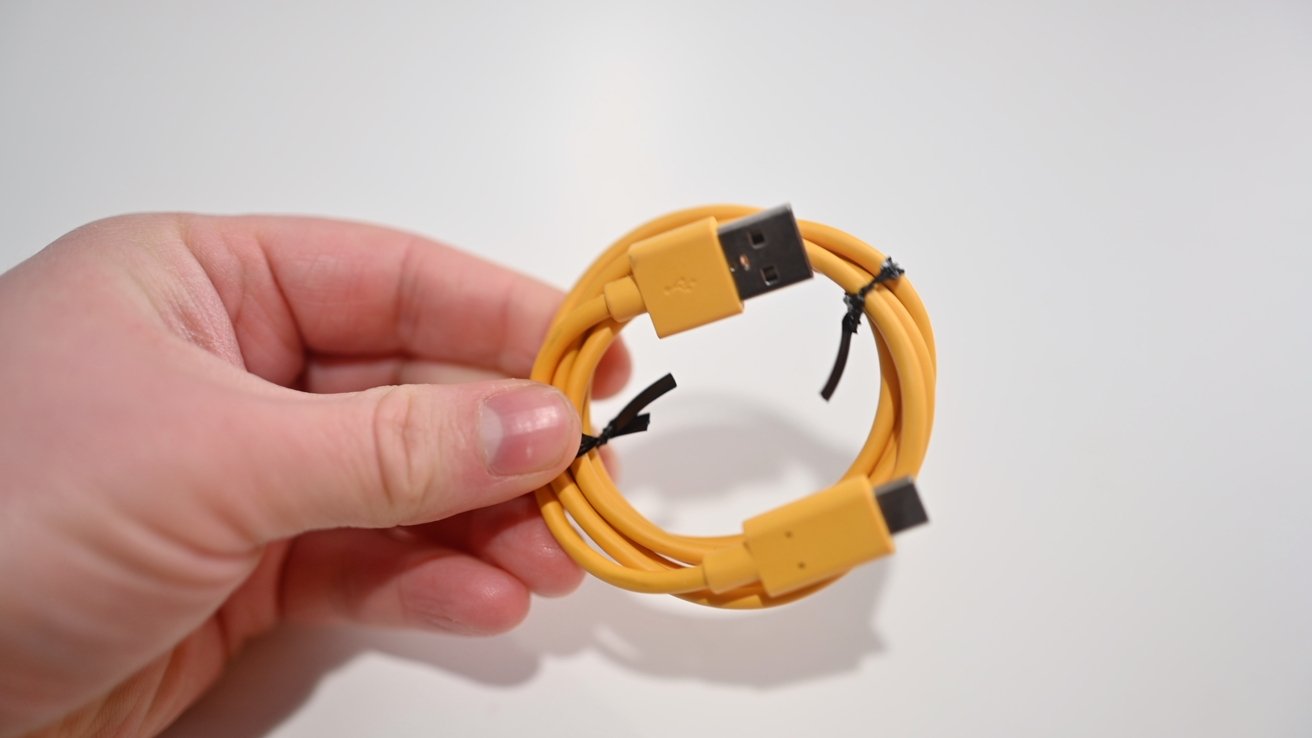 USB-C to USB-A cable bundled in the box

Panic includes a color-matched yellow USB cable in the box, though it is USB-C to USB-A. We’ve said it countless times already — companies should stop including USB-A cables in the box. If anything, a small USB-A adapter would suffice. 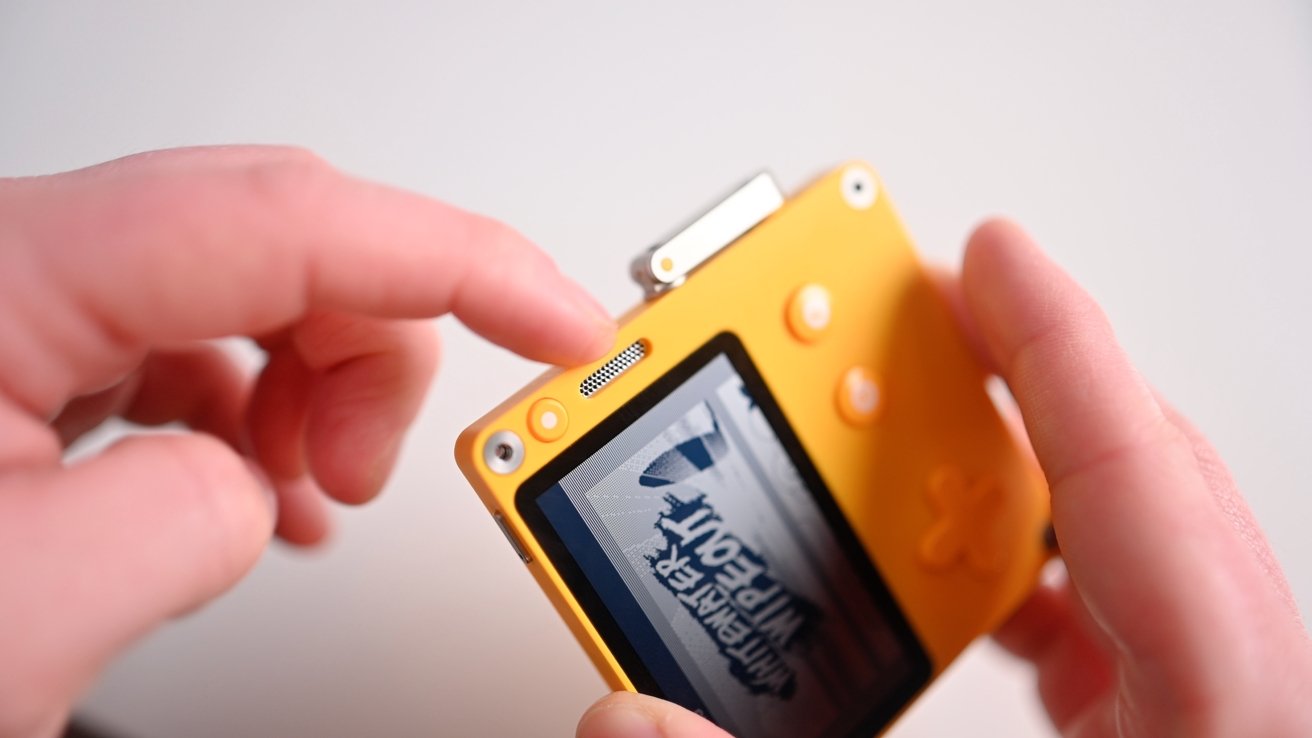 Mono speaker next to the menu button

On-console controls include a directional pad, A and B buttons, a metal sleep button, and a menu button. Then, of course, we have the crank.

The moment we picked up the Playdate it felt different. Unlike other consoles, the whole thing felt polished and with plenty of attention to detail. 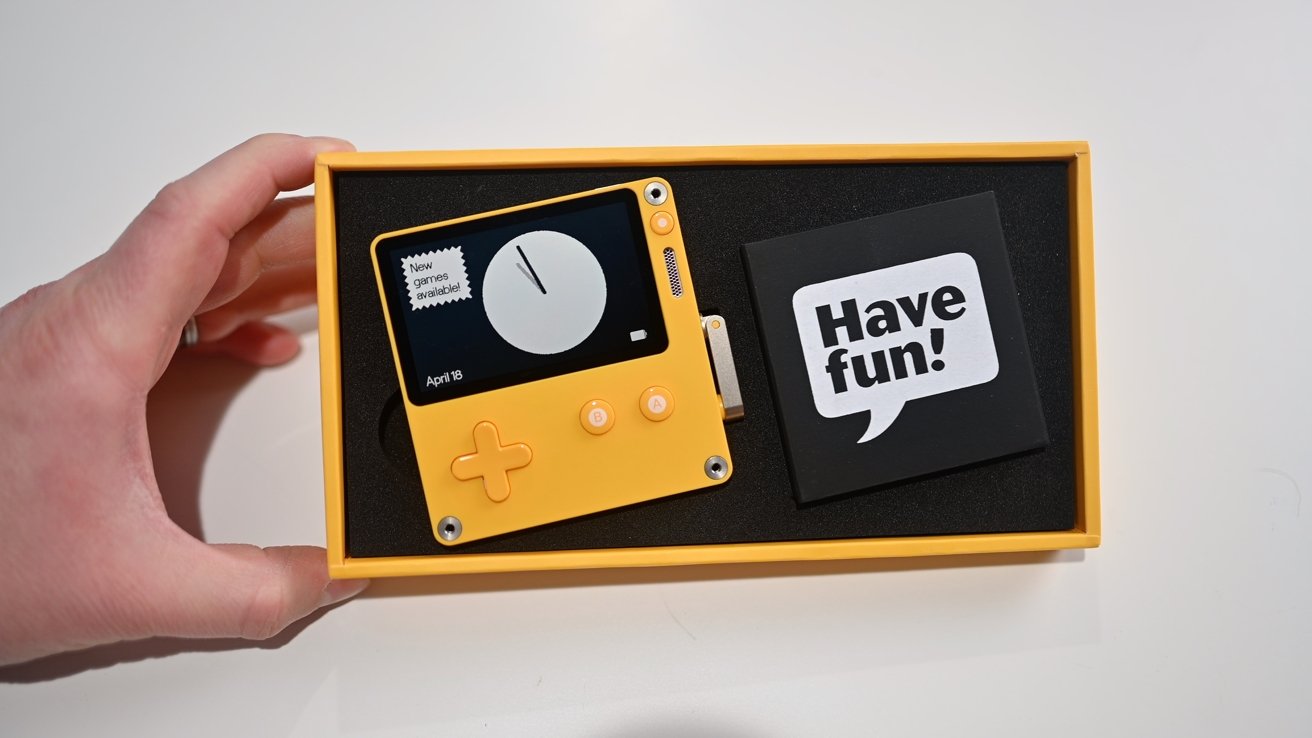 Playdate in its box

Its box is bright yellow, like the console itself. When you open the box, the Playdate isn’t square with the box, but instead just slightly off-kilter. This off-kilter personality is present throughout the Playdate experience. 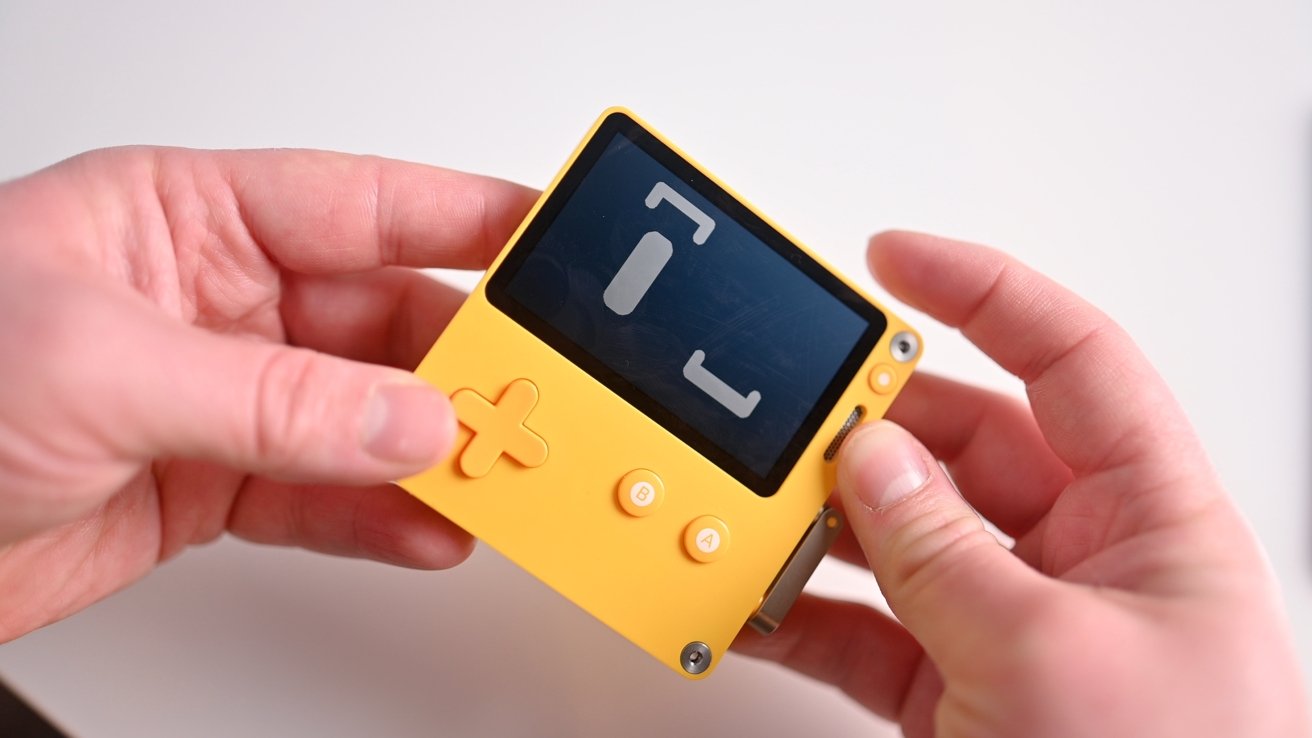 Upon first boot is just the first of many quirky animations and represents what you can expect from the system as a whole. We quickly registered the device with our Playdate account and immediately jumped into several newly-available games.

The first game we tried was Whitewater Wipeout. We’ll be honest — we were terrible. You use the crank to control your surfer as they ride the swell across the screen. We got better over time, though, able to occasionally pull off a 360 spin. 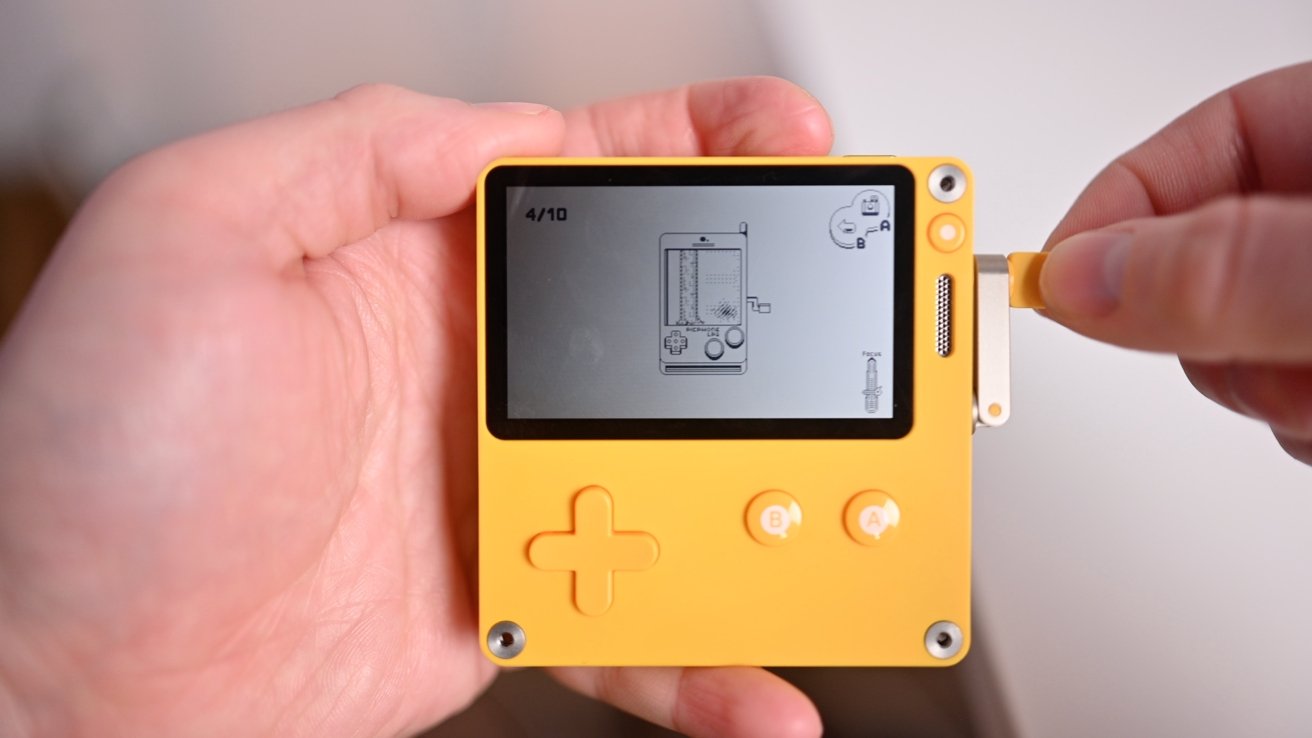 Focusing the camera on Casual Birder

Whitewater Wipeout exclusively used the crank while the second game we tried used it far less. Casual Birder used the D-pad and buttons to play and only used the crank as a physical means of focusing your player’s camera.

This shows off the utility of the crank and how it can be an integral part of a game, a small detail, or not utilized at all. We appreciate Panic didn’t force every game to use the crank. The crank is employed when it makes sense and ignored when it doesn’t.

All of the hardware here feels great to use. The D-pad is ultra-tactile and has much better “clicks” than even what we see with the popular Xbox controllers. The A and B buttons are equally clicky to press.

That crank was likely the hardest to nail down, though Panic pulled it off. It’s metal with a plastic handle on the end. 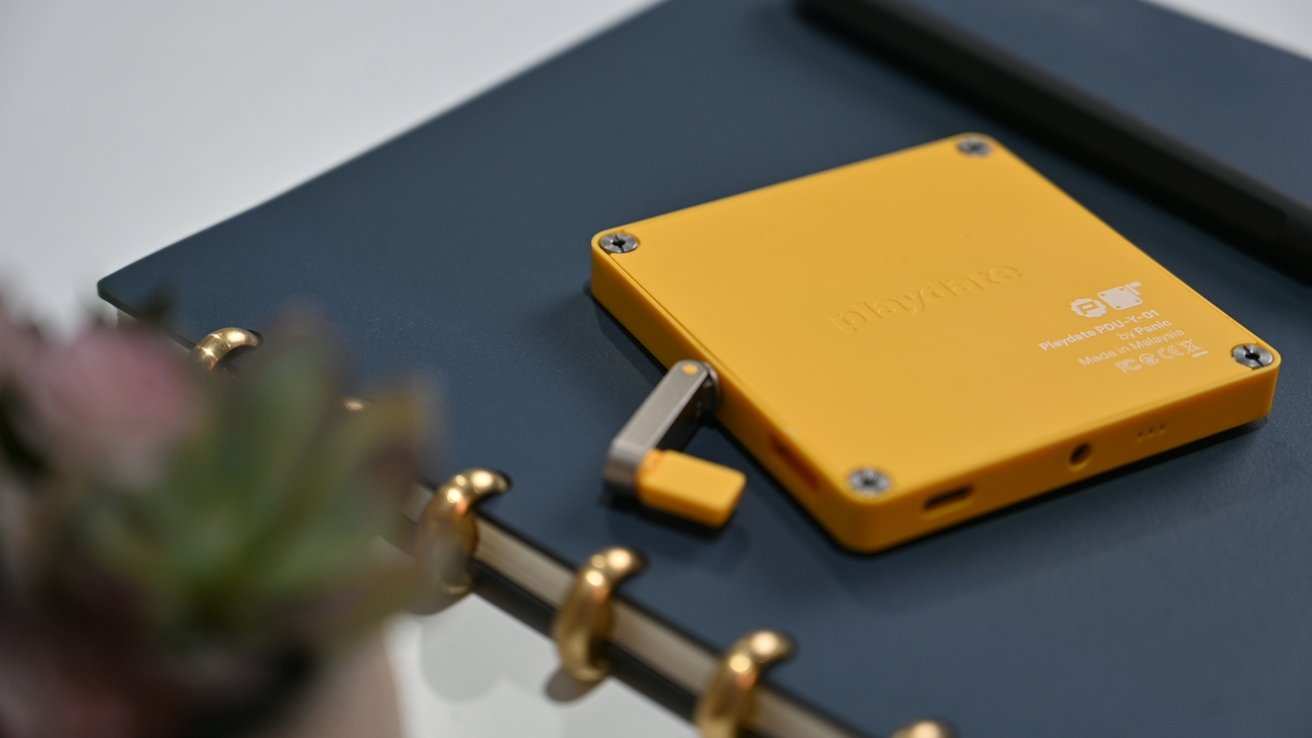 It tucks into the side of the console when not in use and slides out when needed. There is a slight tension as it’s pulled free, but it will lock securely into place when fully open.

It can feel a little flimsy when cranking quickly in certain games, but we like the feel of it.

Where we ran into issues was with the display. It’s full of tradeoffs and may be a dealbreaker for would-be users. Panic told us that the display is too reflective to support a backlight and the front lights they tried didn’t look great, so they omitted a light entirely.

This poses a problem if you want to play in low-light situations. We often want to wind down — pun intended — at the end of the day by playing some games while lying in bed. That’s a no-go with Playdate.

Without the lights on in the room, we couldn’t see the display well enough. Like the original Gameboy, long car rides that stretched into the evenings were a problem. No light means no Playdate.

As a positive, the display is remarkably crisp and pleasing to look at when the lighting is apt. Our smartphone displays often struggle in bright conditions or outdoors, so Panic wanted something that was the opposite. That’s where Playdate does best. 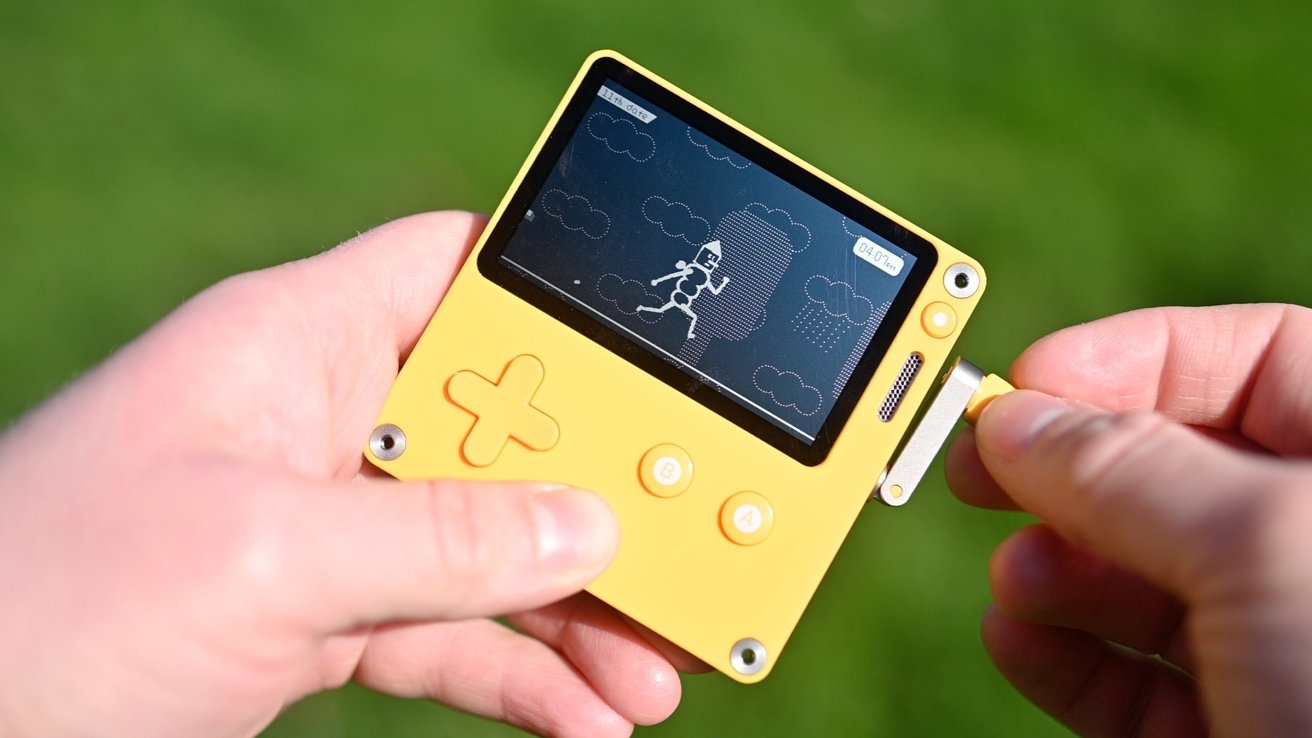 We went outside on the one day of nice weather we’ve had this year and played in the sun. The display was incredible. Its high contrast was on full display as we button-mashed and cranked playing multiple games.

Panic had good intentions with this display and it succeeds in many ways, but without a backlight, it’s hard to play as often as we wanted to.

Crucial to any gaming system is its catalog of games. Panic, as a software developer, knows this. It has made every effort to get plenty of games on the platform it could.

By all accounts, it’s succeeded. 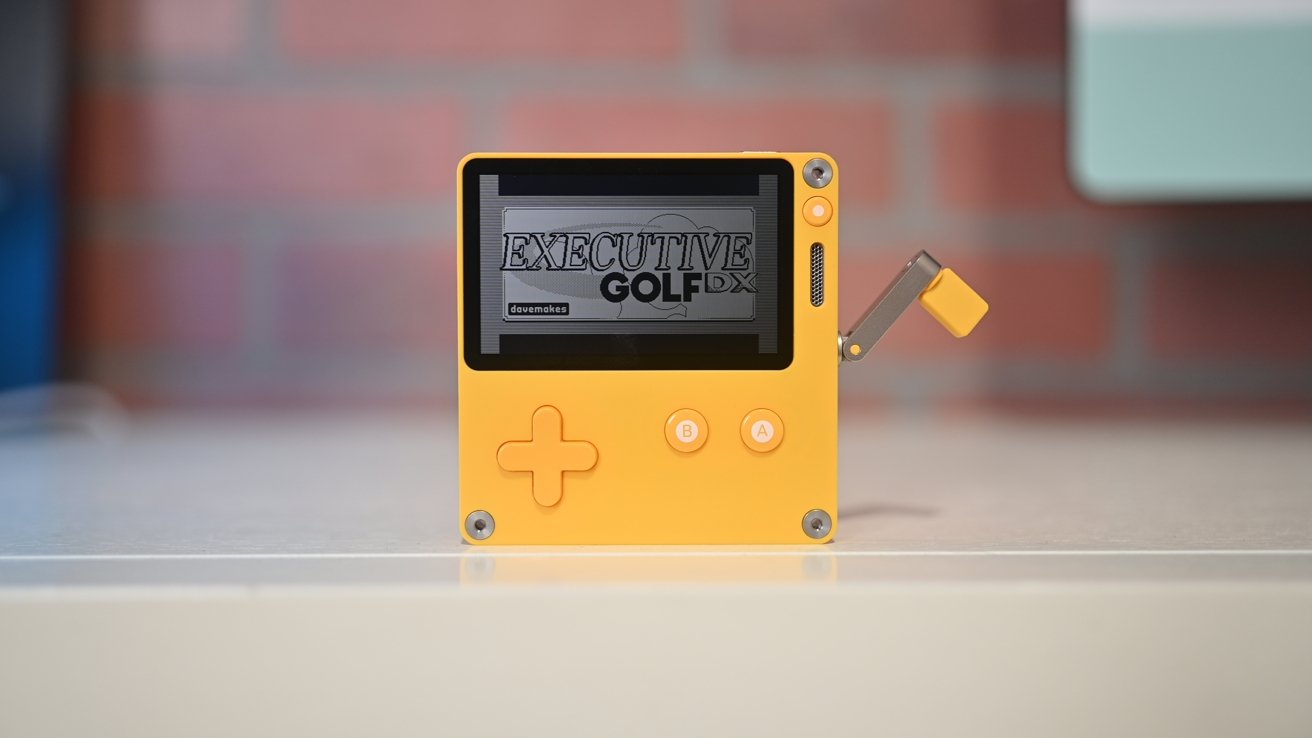 The playdate was initially going to launch with only 12 games but the massive response from the public led to Panic doubling that initial season lineup.

When you buy a Playdate, you get access to the first season of games. What that means is every Friday, two new games will automatically download to your device. You’ll wake up in the morning to a little badge on the lock screen letting you know they’re ready to play. 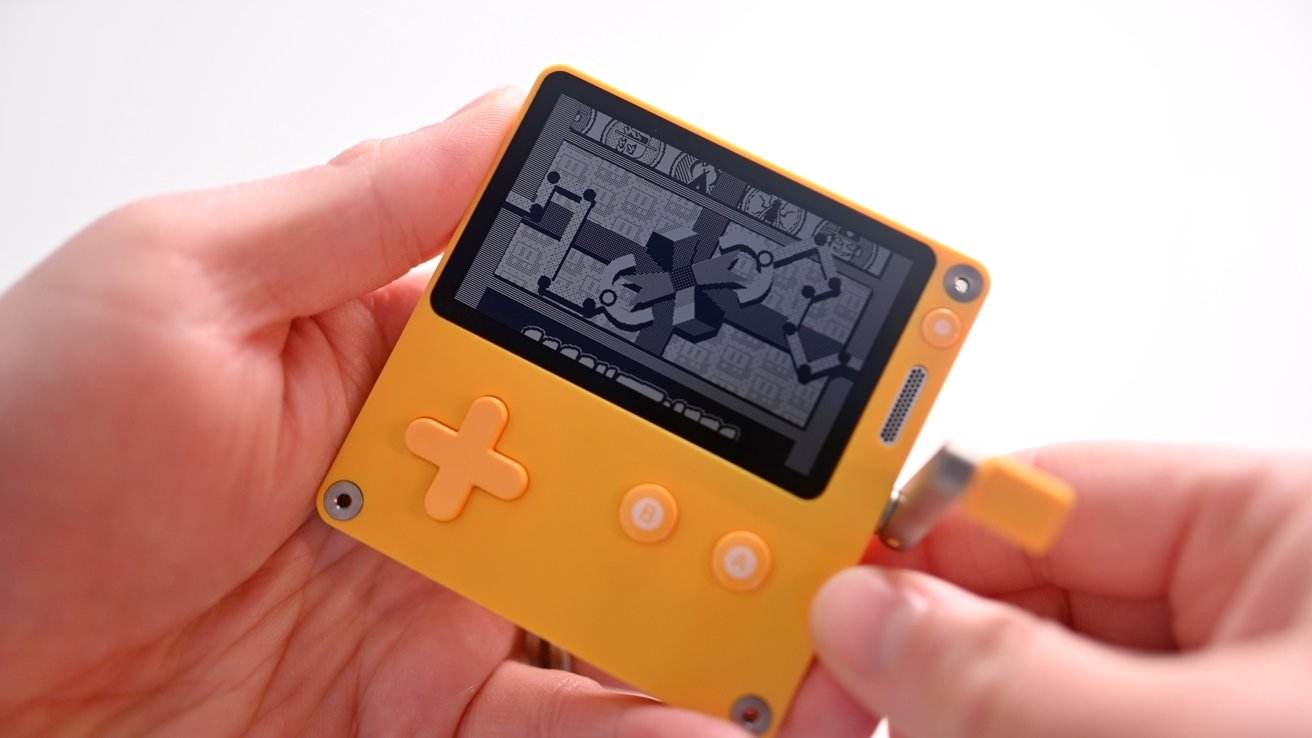 The new games arrive on the main menu, gift-wrapped. When you click on them, two little robot arms will mechanically inch onto the display, pulling the bow, and unwrapping the new game. It’s just one more adorable animation that we love.

These new games will arrive over 12 weeks, giving 24 games to play. You’ll love some games while others may not interest you, but they vary in design, genre, and style.

We had access to all 24 season one games during our testing period. Even after a few weeks of playing with the Playdate, we haven’t tried them all. We’ll get sucked into a game and not want to stop, which is a testament to the games themselves.

To keep some of the games a surprise, we won’t go into too many details. We’ll stick to sharing just a few of the highlights.

Casual Birders, which we mentioned above, was an early standout for us. You wander around town snapping photos of different birds. It has a Pokemon-like feel to it but with a fairly absurd premise. It wasn’t long into the game when a gang of locals approached and mocked us as a “casual birder.”

When you see a bird you want to photograph, that’s when you’ll get to use the crank. You’ll get close before opening your camera. You’ll position the camera you want and then focus it on the crank.

You’ll patiently wait a moment for the bird to land or cross your frame before snapping the pic. It’s very similar to using a real-world camera and a neat way of integrating the crank. That crank feels like a more appropriate mechanism than adjusting the focus with a D-pad. 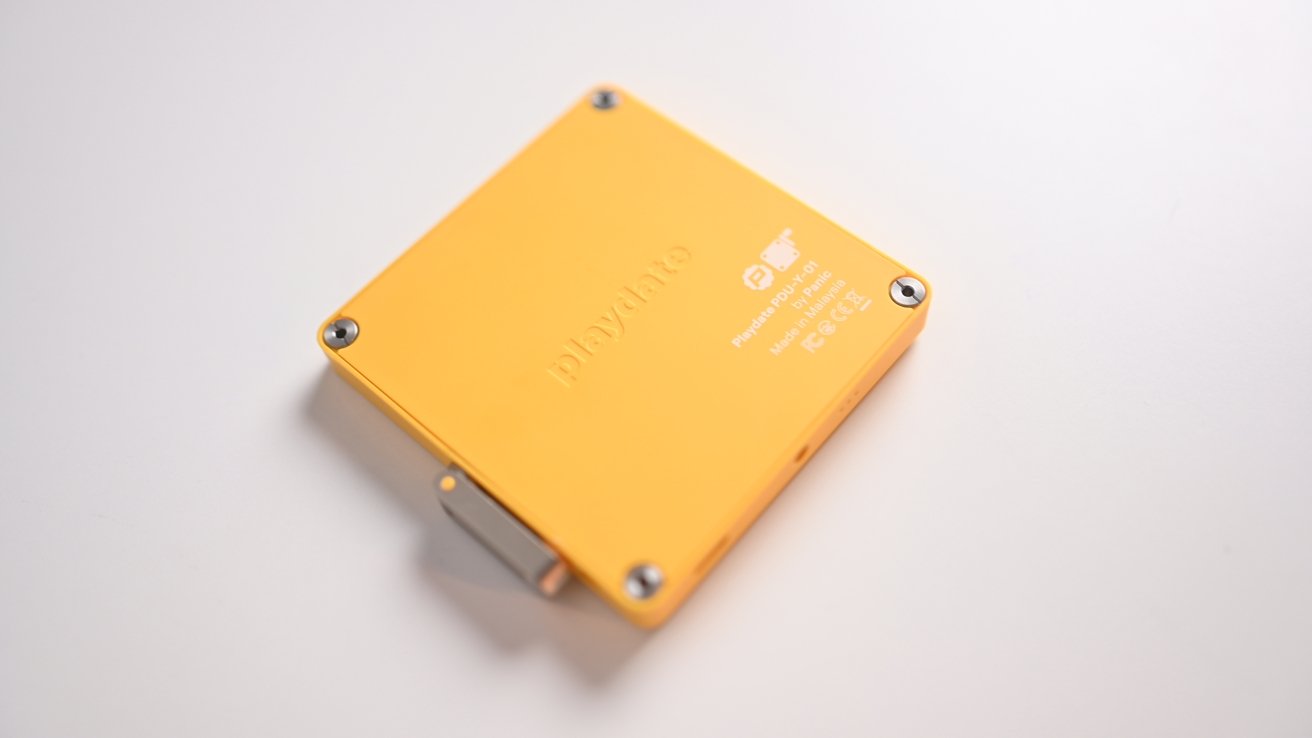 The back of the Panic Playdate

We also loved Time Travel Adventures where you have to deliver your character to a date on time. Obstacles will appear in your way where you have to use the crank to manipulate time and avoid them. Another great, natural use of the crank.

Executive Golf DS and Sasquatchers were two of our other favorites games we went back to repeatedly.

Some of the games were quite short and didn’t take long to finish, while others had lots of replayability.

Not limited to the season pass

With Panic’s pedigree, it should come as no surprise it is very easy to create games for Playdate. It offers a freely-available SDK for anyone to make games. You can download the SDK and get developing right away.

Games are available through the season pass, but they can also be sideloaded. Just connect to your computer — or use Wi-Fi — to transfer the games to Playdate.

Panic even has an in-browser dev platform called Pulp. It’s a quick method to get started and has ways to design your 1-bit fonts and write low-fi music.

Devs can sell their games wherever they’d like to. One such game is Bloom.

Available for $9.99, Bloom is a real-time simulator game where you run a flower shop. You can check in with your shop multiple times throughout the day to see how it’s doing and has an adaptive environment that reacts to the actual time. 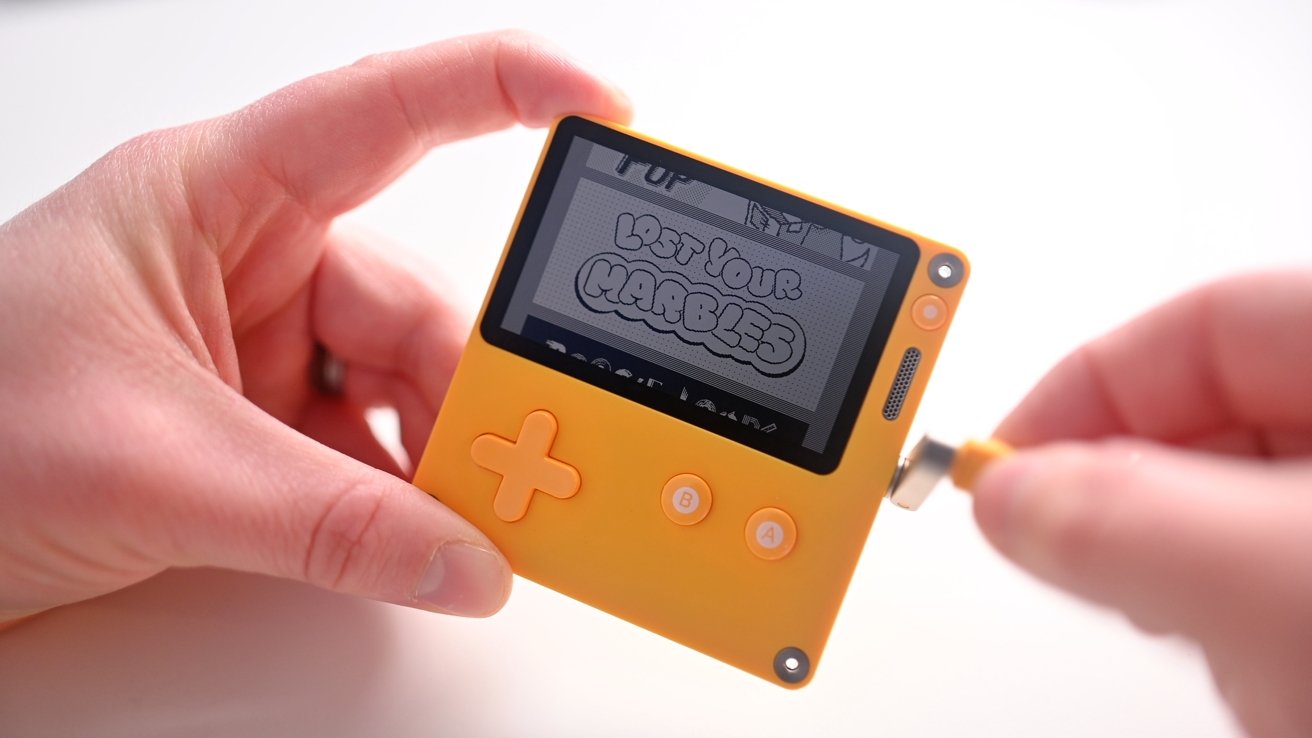 Lost your Marbles is a really fun game

While all of these games are impressive, the future is more opaque. We don’t know what the future holds for Playdate games and how many will be released.

You won’t see any high-resolution first-person shooters or MMOs and the indie development world will likely need to step up for making Playdate worth it long-term.

Should you buy the Panic Playdate?

The Panic Playdate is a darling little console. It’s so unlike everything else we have in our gaming arsenal. There are no external controllers, no TV support, an itty-bitty 1-bit display, and a mono speaker.

It feels like you’ve been teleported back in time to the launch of the original Gameboy. At the same time, it has so many modern touches such as fast flash storage, USB-C and Wi-Fi, and downloadable games. 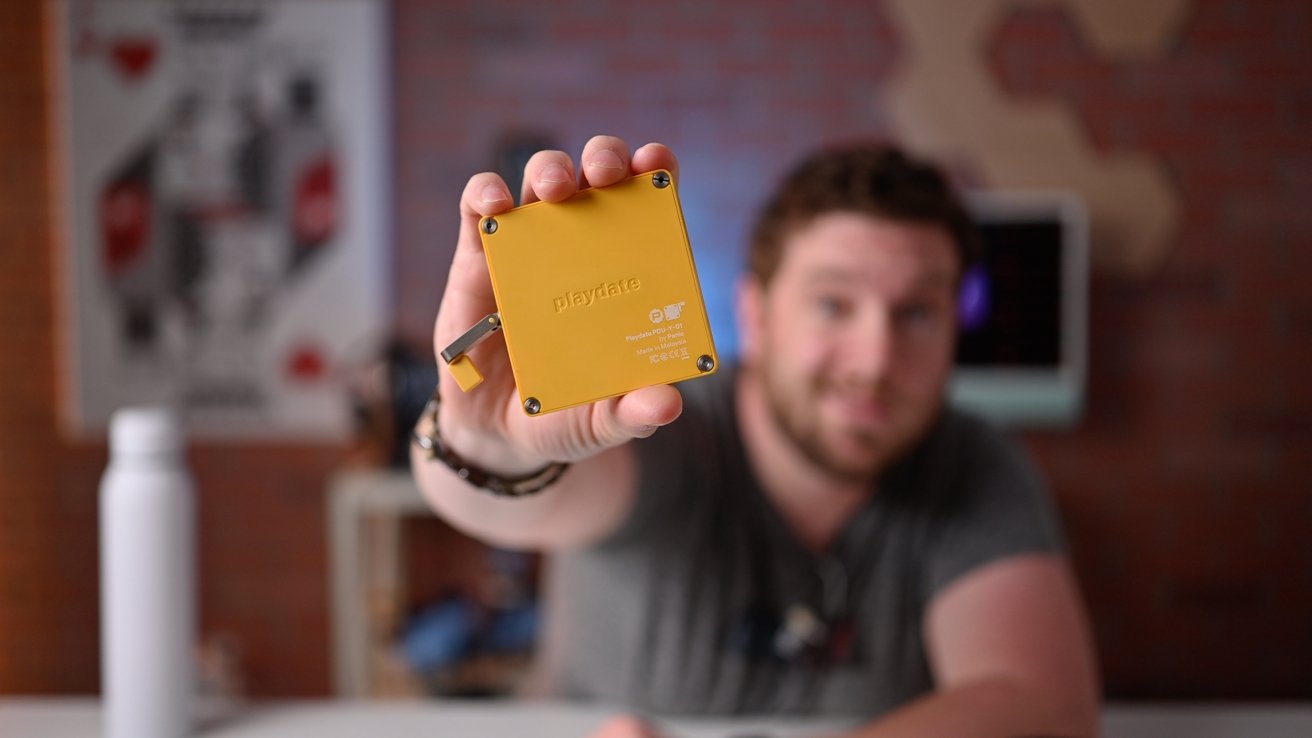 We love the Panic Playdate

As we played with the Playdate, every second was enjoyable. Almost every game was something we wanted to keep playing and it left us excited to see what new games would be delivered next.

Of course, we wish it had a backlight for the display, but it didn’t stop us from playing whenever we could.

If you’re a fan of retro gaming or want something fun and unique, the Playdate is certainly it. Playdate is different, and we love that.

You can preorder the Panic Playdate from the company’s website for $179 which includes all 24 season one games. Note that all new preorders aren’t expected to ship until 2023.

There is also an optional purple cover for $29.